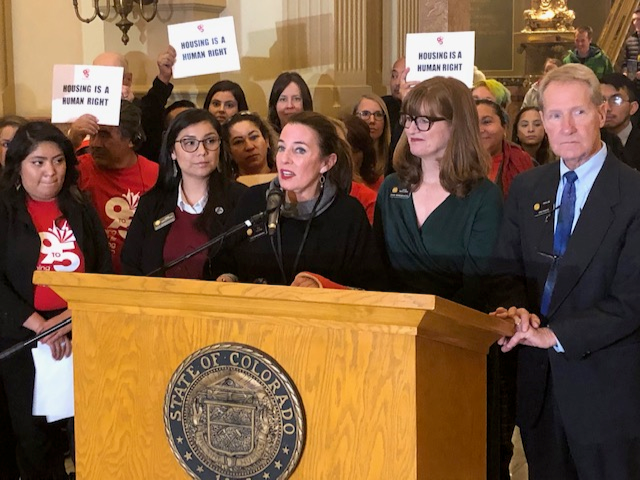 Back in January, Colorado Center on Law and Policy teed up the 2020 legislative session with a Capitol Preview luncheon that featured panel discussions and about 120 participants mingling optimistically about the year ahead. We also rolled out an ambitious agenda for what we hoped to accomplish for Coloradans facing poverty over the next four months. The previous year was perhaps CCLP’s most successful legislative session yet — with all 13 bills we led or co-led passing with bipartisan support, so there was no reason to believe that the momentum wouldn’t continue.

Then, in mid-March, the COVID-19 pandemic effectively shut down businesses and business as usual in the Capitol as quarantines and social-distancing practices put the session on hold for about two months. When lawmakers returned in late May, they were faced with a severe economic downturn, soaring unemployment, the threat of rising evictions and a $3.3 billion budget shortfall – not to mention the most serious public health crisis in 100 years. To further complicate matters, legislators had significantly less time to tie up their work.

Despite those daunting challenges, legislators made significant progress on advancing legislation that will make a positive difference in Coloradans’ lives. Yet, CCLP is concerned that the General Assembly failed to extend a badly needed eviction moratorium. We also worry that deep cuts in the state budget will have a disproportionate negative effect on Coloradans hurt most in the ongoing economic and public health crisis.

When legislators prepared to return to the capitol in late May, CCLP stood with 135 diverse partners to encourage lawmakers to adopt an aggressive three-pronged approach that would declare a health care emergency, optimize the use of federal relief funds and pass an emergency tax measure with the approval of 2/3rds of the House and Senate. Though legislators did not adopt the plan the effort put the need for more revenue in the public spotlight and the coalition and built momentum for House Bill 1420 (aka, the Fair Tax Act).

Earlier this week, the Colorado Senate approved a scaled-back HB 1420, which closed and modified tax breaks that favored the wealthiest Coloradans to backfill the education budget for the next two years and expand the Earned Income Tax Credit (EITC – more on that later). This is a positive step forward and we gratefully thank our many partners for raising their voices through direct appeals to legislators to make this positive change possible. Colorado Fiscal Institute in particular deserves accolades for their leadership on the bill.

All things considered, it was a difficult, short but productive session for CCLP and its partners. Here are the highlights in our focus areas of food, health, housing and income:

Food
Senate Bill 206 passed through the legislature and is heading to the governor’s desk. The legislation clarifies that Coloradans who are disqualified from a public assistance program due to an intentional violation of the program’s rules are allowed to re-enroll or stay enrolled in other programs, provided they are not found to have intentionally violated those programs’ rules. Thanks to the legislators and partners who supported the bill, which applies to food-oriented assistance programs such as SNAP and WIC and other state benefits programs.

Before the session started, CCLP joined its partners in the Colorado Blueprint to End Hunger to increase outreach funding for the Supplemental Nutrition Assistance Program (SNAP) so more eligible Coloradans can get the food they need. Unfortunately, while legislators agreed to fund outreach in the long bill, they cut $87,000 from the $400,000 program. Advocates wanted to double the funding to $400,000.

Health
Last week, House Bill 1236 passed through the Senate and is heading to the governor’s desk. The bill would use the regular state tax-filing process to inform Coloradans of their eligibility for Medicaid, CHP+ and tax credits. Thanks to our partners for supporting this commonsense measure to ensure that more Coloradans get the health coverage they need more than ever. Special thanks to Rep. Susan Lontine, Rep. Perry Will, Sen. Jack Tate and Sen. Jeff Bridges for acting as prime sponsors for this legislation.

The COVID-19 pandemic has shown how our health depends upon our neighbor’s ability to access the health care they need. SB 215 would capture fees already being paid by insurance carriers to: Continue Colorado’s successful reinsurance program for an additional five years without any cost to the state general fund; improve the buying power of federal tax subsidies for individual-market consumers; and create more affordable health insurance options for people left out of the Affordable Care Act — including individuals in the “family glitch” and people without documentation. The bill passed with bipartisan support and is heading to the governor’s desk.

Housing
Earlier in the legislative session, lawmakers introduced HB 1196 and HB 1201 to amend the Mobile Home Park Act and provide more stability for Coloradans living in these neighborhoods. Both now head to the governor’s desk. Thanks to all the legislators who sponsored supported these important bills that will make a difference for homeowners residing on rented lots. Also, thanks to our partners, notably 9to5 Colorado, for being such great champions of this legislation.

In 2019, CCLP led a bill that established the first-ever legal defense fund for Coloradans facing eviction. Although the eviction defense fund was cut from $750,000 to $600,000 in the long bill, an additional $350,000 in funding was added as part of HB 1410, giving eviction defense a short-term boost when it is most needed. An attempt to increase funding for Eviction Legal Defense by raising the fee to file evictions, HB 1405, failed this year.

Also regarding evictions, HB 1009 was approved by both chambers and signed into law on March 20 and will become effective on Dec. 1 of this year. The bill will keep eviction records from public view so that tenants will not have to face a barrier to housing because of a filing that’s been dismissed or still pending. Thanks to all partners and legislators (particularly Rep. Dominique Jackson and Sen. Faith Winter) who supported this important tenants’ rights legislation.

Income
Last week, SB 29 passed through the House and is on its way to the governor’s desk. Thanks to Colorado Children’s Campaign for a great partnership on this bill. As amended, the legislation would provide a one-time $500 basic needs payment to every family enrolled in Colorado Works- Colorado’s Temporary Assistance to Needy Families (TANF) program.

As mentioned earlier in this posting, HB 1420 will expand Colorado’s EITC from 10 to 15 percent of the federal EITC. Also, starting in 2022 immigrant tax filers will be eligible for the state EITC for the first time. Near the beginning of the session, lawmakers introduced HB 1203, which would have expanded the state Earned Income Tax Credit (EITC) and commenced the payment of the Child Tax Credit by changing tax deductions for corporations. However, bill sponsors Rep. Emily Sirota and Rep. Matt Gray pulled HB 1203 in favor of HB 1420, without the Child Tax Credit, but with a different funding mechanism to pay for the expansion. Though the scope of HB 1420 has been narrowed, the expansion of the EITC will make a meaningful difference for hard-working Colorado families. Thanks to Colorado Fiscal Institute and all who supported this important bill.

Despite the progress mentioned above, there’s still much work to be done. Governor Polis’s new Executive Order on Evictions requires landlords to give 30 day notice for eviction for non-payment of rent, rather than the existing 10 days, encourages landlords to work out repayment plans with tenants, we question whether this is enough to address the critical housing-security issue–  given the severity of the economic downturn triggered by the pandemic We encourage the governor to seek longer-term policy solutions to what could degenerate into a grave problem of rising homelessness

Although the scaled-back HB 1420 will prevent some cuts in the state’s budget, it’s apparent that Colorado will need more revenue to successfully recover from the economic downturn. Voters may get a chance to address this issue in the November election if Initiative 271 (the Fair Tax Colorado proposal) gets on the ballot. Unfortunately, even if the measure is approved by voters, it will only provide fiscal relief for the state after 2021.

Finally, we commend legislators for passing SB 217, the Enhance Law Enforcement Integrity Act. If signed into law by the governor, the bill makes Colorado among the first states in the country to tackle wholesale, statewide police accountability reform. Equity is central to CCLP’s vision, mission and values and while there’s much work to be done in this area, the broad bipartisan support this bill garnered is an encouraging sign that change is afoot

All in all, we’re pleased that legislators made poverty and equity issues a major priority in 2020, despite severely diminished financial resources and a lack of time. Rest assured, the advocates at CCLP are already rolling up their sleeves for the 2021 session in defense of Coloradans facing poverty.