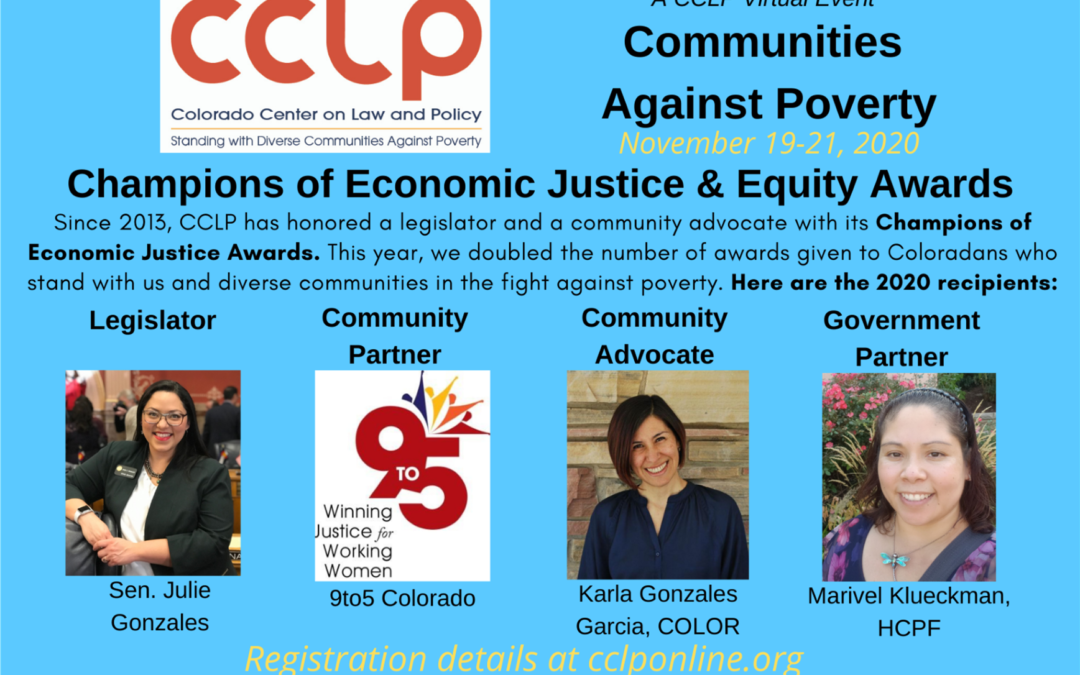 CCLP’s Colorado Champions of Economic Justice & Equity Award recipients will be honored during our Communities Against Poverty virtual event from noon to 1 p.m., Nov. 19. Details on the event, registration and sponsorship are available here.

Every year since 2013, Colorado Center on Law and Policy has honored a legislator and a community advocate with its Champions of Economic Justice Awards, recognizing Coloradans’ contributions to our mission. For 2020, we doubled the number of awards given to Coloradans who stand with us and diverse communities in the fight against poverty. Along with a Legislator and a Community Advocate, we’ve added a Government Partner and a Community Partner Organization to the mix. The recipients will be officially honored at CCLP’s Communities Against Poverty virtual event, Nov. 19.

The CCLP staff discussed nominees during staff meetings earlier this month and reached a consensus on three individuals and one nonprofit organization.

This year’s Colorado Champions of Economic Justice & Equity Award will be:

The sixth of seven children in her family, Sen. Gonzales was born in Arizona and raised in south Texas, Gonzales’ mother was an elementary school teacher and her father was a rancher and medical cannabis producer. Shortly after graduating from Yale University she moved to Denver, where she had previously spent summers in high school working to save for college. As community organizer, she advocated for the DREAM Act and on immigration issues as Policy Director for Meyer Law Firm.

She has played an integral role in passing in-state tuition for Colorado Dreamers, ensuring that all students receive high-quality college preparatory education, and passing Denver’s sanctuary policy to protect immigrant communities. She sponsored a wide variety of legislation in 2020 on immigration, criminal justice issues and consumer protections.

Community Partner: 9to5 Colorado
Part of a national organization of working women founded in Boston in 1973, 9to5 Colorado has fought and won many policy victories that have made a lasting change for Colorado women and their families.

In advocacy circles, 9to5 is known for their integrity, their fearlessness, their compassion, their unrelenting dedication and their commitment to racial and economic equity. This year, their work on paid family leave, rental late fees, and the bills to reform the Mobile Home Park Act, demonstrates their breadth of expertise and the depth of their political courage.

They have immense integrity and are willing to fight for meaningful progress even when it has been incredibly difficult. They are also fantastic partners and have gone above-and-beyond in offering support to CCLP and other organizations.

9to5 Colorado embodies the best in how robust grassroots organizing can compel and drive institutional changes. The people of Colorado have benefitted immensely from their advocacy.

Government Partner: Marivel Klueckman, Colorado Department of Health Care Policy and Finance (HCPF)
As HCPF’s Eligibility Division Director since 2012, Marivel presides over a complex eligibility system that undergoes constant change and development — due to often dramatic shifts in federal and state policies and requirements. In managing these daunting tasks, she works with eligibility staff both in Denver and in counties throughout Colorado.

A native Coloradan, Marivel’s parents emigrated from Mexico, and in her words, “has the pleasure of having that cultural background.” The mother of two sons, she passionate about her family and about her work.

Collaboration is key in all that she does, and that’s a constant both when dealing with new policies and when working with organizations like CCLP. Her staff is notably diverse and she does an exceptional job at retaining and developing talent. Marivel says she makes sure to find individuals who can relate to the experience of Medicaid clients, and identifying those who want to make a difference over the long-term.

She got her start in as a bilingual customer service representative for CHP+ in 2000, and really values having had that direct contact with individuals, though she also appreciates being able to have a larger scale impact in her current position.

Community Advocate: Karla Gonzales Garcia, COLOR
Karla is champion for people and for communities that have experienced traumas of violence and oppression. In her native Peru, where she obtained a bachelor’s degree in psychology, Karla counseled child victims of sexual assault and worked to support kindergarteners with learning disabilities.

After moving to the United States, Karla continued advocating for survivors of intimate partner violence and for the rights of immigrants and their families. Guided by her commitment to social and racial justice, Karla obtained a second degree in women and gender studies at Colorado State University –overcoming the challenges of pursuing a degree in her second language.

In her current role as the Policy Director at the Colorado Organization for Latina Opportunity and Reproductive Rights (COLOR), Karla is a force for equity. She models for advocates, lobbyists and legislators what it means to root systems-change work in core values for human dignity and justice.

Staff at CCLP were honored and inspired to work closely with Karla on Senate Bill 215, which dedicates state funding to make affordable health insurance options available to people who have been denied access to health care because of their immigration status.

We’ve been inspired and encouraged by Karla’s work, and we are honored to recognized her with this award.

Again, congratulations to these outstanding individuals and organizations!  CCLP is honored to honor your important work and to stand alongside you in fighting for racial equity and against poverty.