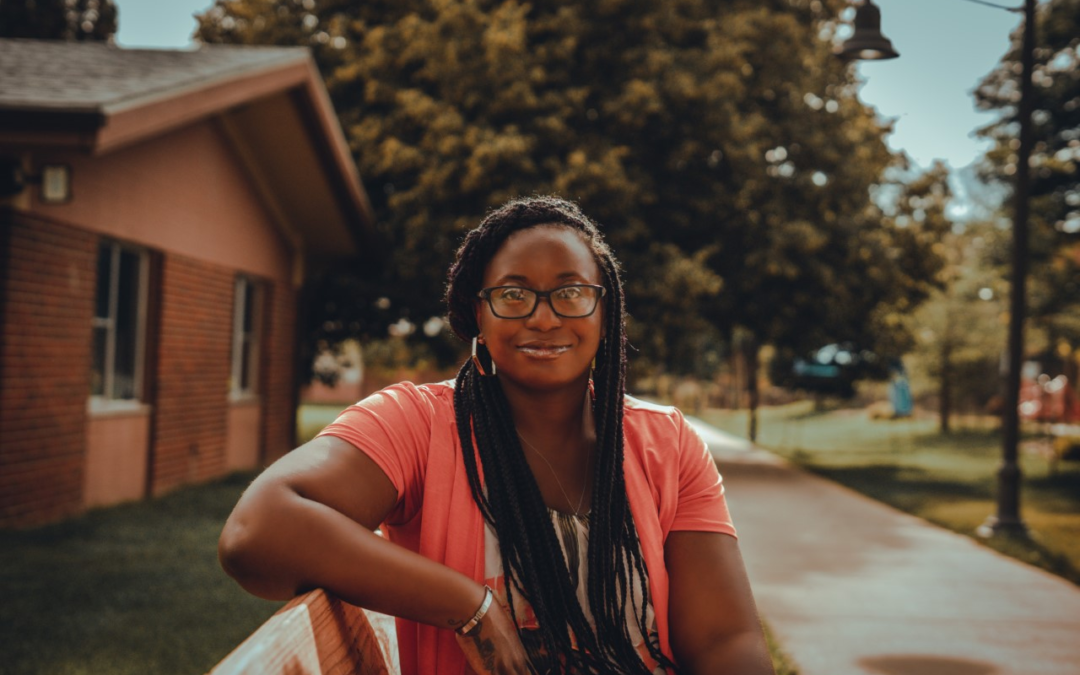 Editor’s note: This vignette is part of the Lived Experience series, which highlights how Coloradans benefit from policy and advocacy efforts led by CCLP and its partners.

Imagine living in the same community for six years and paying rent every single month on time, only to receive a notification on your door stating that you will be evicted and that you owe $15,000 in rent.

“I’m like wait, how is that possible?” explains Ealasha Vaughner, the recipient of the aforementioned notice. “I would have been evicted by then [and] I’ve paid rent every month on time. There’s just no way.”

This notice was one among many of the problems that Ealasha experienced while living in a community that is managed by an affordable-housing organization. “Throughout the years I have had a lot of issues,” Ealasha says. “I’ve had to unfortunately make sure I have the right emails, make sure I keep copies of everything I sign, because every year you have to recertify [to continue living with the housing organization], and every year something was wrong.”

Before being accepted to live in her current affordable housing community, Ealasha shared an apartment with her then-husband. “We had two incomes and a house and were doing exactly what we were supposed to do,” she says. “Unfortunately, my ex-husband, he kept getting in trouble…we ended up losing our house and me and my daughter were homeless for about three to four months until I was able to get the temporary housing.”

Ealasha is a mother of two daughters, aged seven and four. In addition to having three bachelor’s degrees, she is an active community member and advocate who is part of several policy groups, including Clayton Early Learning’s Parent Ambassadors Program — for which she is one of the founding members. Due to COVID-19 and the transition to online schooling, she spent the past several months at home with her daughters. “Working, trying to do their schooling from 8:30 (a.m.) to 3:30 (p.m.) as well as taking care of them at home has been different to say the least,” she says, “[I’m] trying to balance that all out.”

It was during these recent months that Ealasha received her eviction letter. After investigating, Ealasha found that the $15,000 balance was due to errors made by previous leasing managers. “For the last two years the old leasing managers were not turning in paperwork that I signed,“ she explains. “They didn’t tell me I had to sign a new letter each year saying how much my rent was. So, my rent was supposed to be a certain amount for the last two years and I was paying something completely different.”

Ultimately, Ealasha had to pay $5,000 to resolve the issue. “It’s [between] a rock and a hard place because you got to pay the balance off,” Ealasha says. “On paper, it’s your responsibility… So, I had to and have been looking for rental assistance, picking out of my own emergency fund just to pay off this balance that could have been prevented if the housing department did their job.”

This is not the first time that Ealasha has been threatened with eviction while living in her current residence. Previously, her housing community had accused her of fraud when they believed her to be working two full-time jobs — one in Denver and one in Wyoming. Ealasha explains, “I got a letter on my door saying that I was going to get evicted and get federal charges because I wasn’t turning in income… I had to do all this stuff to show I wasn’t working in a different job, even though it was very obvious that someone had taken my identity.”

Ealasha believes that more regulations are needed in order to ensure that paperwork is properly done and tenants are not forced to bear the brunt of managerial mistakes.

“A lot of those situations were very difficult because they thought that they could just walk over me because I’m a tenant,” she says. “If I had legal counsel they probably would have got things situated and figured out quicker than when I was just doing it myself… I had to deal with it all on my own. I didn’t have any help.”

A common problem
Wrongful evictions and notices are much more common than one might think, and it is not unique for Coloradans like Ealasha who are facing eviction to be unable to access legal assistance or be forced to take on landlords alone. In a 2017 study of Denver County evictions that occurred from 2014-2016, Colorado Center on Law and Policy found that tenants were only represented by an attorney in 1 to 3 percent of cases, whereas landlords were represented almost 100 percent of the time.

“There are roughly 45,000 evictions filed in Colorado each year, and most tenants facing an eviction are left to navigate the complex legal system by themselves, without the assistance of an attorney.  These evictions frequently destabilize families, disrupt communities and uproot children from their schools,” says Jack Regenbogen, Esq., Senior Attorney at CCLP.

Legislation addresses concerns
These concerns are what motivated CCLP to work towards one of its major legislative successes of 2019: passing Senate Bill 180. The bill created an eviction legal defense fund that would award grants to qualifying nonprofit organizations who provide free or low-cost legal counseling to clients experiencing eviction.

For the 2019-20 state fiscal year, $750,000 in General Funds was appropriated to the eviction legal defense fund. Alongside COVID-19-related budget cuts, however, general funds for the Eviction Legal Defense Fund were cut to $600,000 for FY 2020-21. Now more than ever, this fund has proven to be extremely helpful for eviction legal defense organizations who are working to combat looming and unfathomably high numbers of COVID-19 related evictions. Given the irrepressibly immense role of evictions in contributing to a homelessness and hunger crisis brought on by the pandemic, increased and continued advocacy and funding is needed.

COVID-19 aside, the housing situation in Colorado was already dismal and higher levels of advocacy are long overdue. In the words of Ealasha, “Something has to give. Our housing is way too expensive for the amount of money were getting offered for positions… Something has to balance out. Either the government has to give more funding for housing or we’re going to have to get paid more to be able to live in Colorado.”

“The Parent Ambassador Program honors the leadership of parents while building skills to engage in state policy and advocacy, offering parents opportunities like public speaking, testifying, writing op-eds in local media, or participating in press conferences and engaging in law making.  Stipends are given to all parents that participate, and childcare reimbursement costs available. We believe parents are the sleeping giants, equipped with natural leadership skills to make change in their communities, schools and state. Please contact Kayla Frawley, [email protected] to get involved.