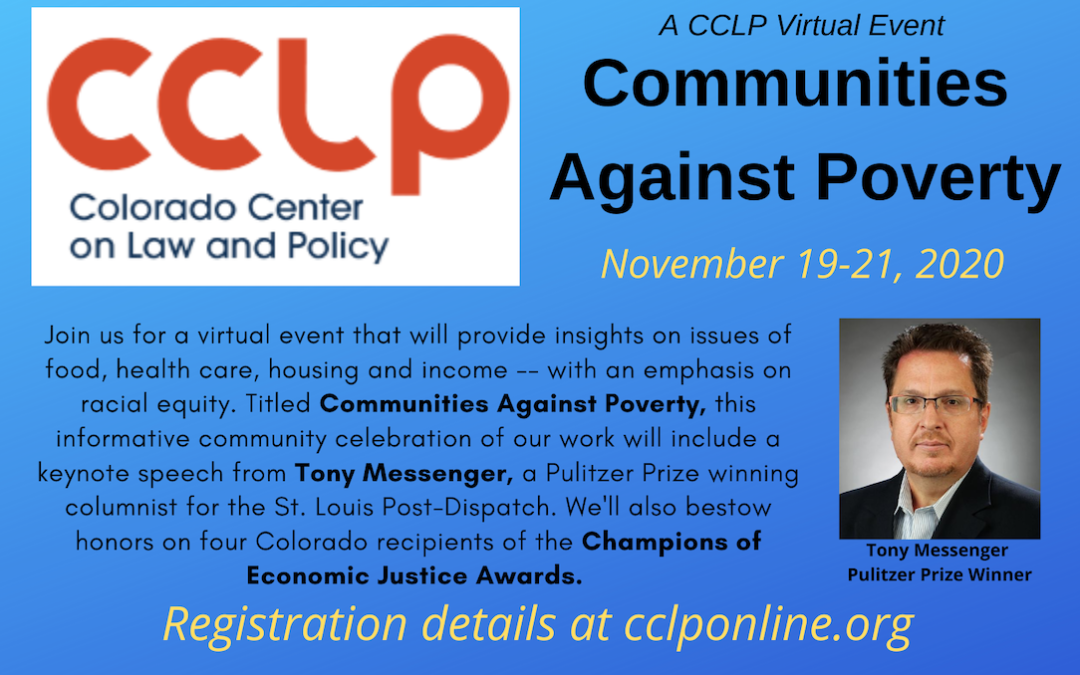 Meet Tony Messenger: Pulitzer Prize winner gives those who are struggling a voice

Tony Messenger will give a keynote speech and answer questions at CCLP’s Communities Against Poverty virtual event, Nov. 19-21. Visit our event landing page to register or sponsor this informative community celebration of our work.

As one of the few commentators in the country who focuses on racial, social and criminal justice issues, perhaps Tony Messenger should be placed on some kind of “endangered species” list.

The metro columnist for the St. Louis Post-Dispatch, Messenger’s honest, straight-forward and often powerful work often uncovers the negative effect that public policy and corruption has on Missouri’s most vulnerable citizens. Messenger and his newspaper colleagues were acclaimed for their coverage of racial unrest in Ferguson in 2014, which he says helped him uncover other flaws in the criminal justice system that essentially punishes people for being poor while often violating their civil rights. The subjects of Messenger’s columns openly recount their experiences firsthand with no filter, revealing tales fraught with systemic racism, drug addiction and brushes with the criminal justice system.

“When people are honest with their failings, most people are willing to understand,” he says. “As tough as times are now, I still believe in the fundamental goodness of people. If you let people tell stories in a way that lets other people identify with them, their eyes are open to seeing the bigger picture.”

Well-known in Missouri, Messenger’s body of work has garnered greater national attention in recent years. In 2019, the Pulitzer Prize Board recognized Messenger’s persistent reporting in a series of columns about debtors’ prisons in Missouri by honoring him with the prestigious and coveted Pulitzer Prize in Commentary.

Drawing inspiration from individuals who were abused by the judicial system, Messenger’s bold columns “exposed the malfeasance and injustice of forcing poor rural Missourians charged with misdemeanor crimes to pay unaffordable fines or be sent to jail,” the Pulitzer committee wrote. The series resulted in reforms and legislation in Missouri intended to correct injustices that too many Missourians have suffered.

From Littleton to Ferguson
A native of Littleton, Messenger lived in Colorado for about half of his life before settling to Missouri. He graduated from J.K. Mullen High School and attended Loyola University Chicago where he became sports editor for his college paper (but did not graduate). Having kick-started his journalism career, he then worked as a reporter, editor and publisher in small newspapers in Nebraska, Colorado, Arizona and Missouri.

Over the years, he gravitated to opinion journalism, eventually landing a job at the St. Louis Post-Dispatch. There, he covered state politics and wrote a political column. Later, he was promoted as the editorial page editor where he was working in 2014, when Michael Brown — an unarmed Black teenager — was shot and killed in Ferguson, setting off a wave of unrest from protestors.

“Ferguson changed me,” Messenger says. “The stuff we were writing as it relates to police brutality and the criminal justice system is how I first became aware of this idea of the courts using fees to nickel and dime people to death… It has sort of become my life’s work at this point. I continued to expand the repertoire whenever I tackle a new issue. These are the people who deserve to have a voice, and if you are not going to write about them, then what’s the purpose?”

As the uprising in Ferguson reverberated, episodes of police violence against Black citizens continued to make headlines around the country from the killing of Elijah McClain of Aurora in 2019, to the fatal shooting of Breonna Taylor of Louisville in March of this year to the horrible death of George Floyd under the knee of a police officer in Minneapolis in May. While such tragic and unfortunate episodes resulted in the avoidable loss of lives, they’ve also elevated the issue of systemic racism, got the issue of racism into the board rooms across America and changed the nature of the discussion.

“What’s happened in the past six months with Black Lives Matter becoming mainstream is because of the combination of that awful video of George Floyd and so many athletes deciding they were going to make it personal and they weren’t going to let it go,” Messenger says, alluding to peaceful protests from NBA and NFL players. “At the very least, it’s opened people’s eyes to something they weren’t aware of. Once people start thinking about these incidents in a different way, then we start to get closer to change. We’re still nowhere near where we need to be because of overall change. The powers of the status quo are really powerful. So, there’s a lot of pushback going on right now, but I think the conversation has been elevated to a significantly different place than it was two or three years ago. We still have a long way to go to pass the sorts of policies that might actually bring some justice in some of these cases.”

Uncovering inequities in Missouri and beyond
The incident at Ferguson opened Messenger’s eyes wider to the issues of racial and social injustice in every level of government, inspiring him to develop the Pulitzer Prize-winning series of articles that told the story of how debtors’ prisons impacted peoples lives. While the series resulted in some reforms in Missouri’s criminal justice system, Messenger says there’s still much progress to be made.

“Unfortunately, on social justice issues, generally, Missouri does not do very well,” Messenger says. “The state legislature did pass a bill in response to debtors’ prisons in response to the columns that I was writing — and that was good — but it was one little drop in the bucket compared to the bad policies that negatively affect poor people all the time.”

Not one to rest on his laurels, Messenger vowed on the day that he won the Pulitzer to keep the spotlight on racial, social and criminal justice issues. Along with his day job at the Post-Dispatch, he’s making gains in the public speaking circuit and is completing his first book, tentatively titled “The Price of Poverty: A Tale of Profit and Abuse in the Name of Justice.” He says the project expands the work on the debtors’ prison series and examines the problem nationwide.

“It’s a problem all over the country … including in Colorado,” he says. “One of the areas that’s become a big national issue of concern is the suspending of driver’s licenses for failure to pay court costs. The punishment doesn’t fit the crime. You take away people’s drivers licenses, they can’t work, so how in the hell are they going to be able to pay the court costs? It doesn’t make sense.”

During his upcoming keynote speech at CCLP’s Communities Against Poverty virtual event, Messenger says he’ll discuss how the global pandemic’s effect on poverty and how it’s highlighted fundamental institutional problems in dealing with poverty among other themes.

The media’s role in democracy
Though traditional media might seem financially and socially beleaguered at this moment of time, with newspapers across the country struggling to stay afloat and politicians questioning the credibility of coverage, Messenger believes it widely misunderstood and essential for a functioning democracy.

“When the president of the United States calls you the ‘enemy of the people,’ it has a real impact on democracy because you have an entire segment of people who falsely believe that what most journalists do is somehow dishonest or partisan in nature rather than speaking truth — which is what every journalist I’ve ever known is trying to do,” he says. “It’s bad for democracy and it comes at a time when our financial model is in flux. It makes it that much more difficult because right now we need journalists and journalism institutions to be courageous in this time. For the past seven years, most of us have been worried about layoffs. And that changes morale and our overall ability to perform at a high level.”

Despite these daunting present-day challenges, Messenger is optimistic about the future of the free press.

“I absolutely think we are going to survive, but it will take different forms,” he says. “There’s a movement in the journalism world to create nonprofits that can withstand the pressures of our current system. I don’t know what the future looks like in 10 or 20 years, but the journalism model will prevail.”

Read the latest Tony Messenger columns from the St. Louis Post-Dispatch and STLtoday.com through this link. Learn more about CCLP’s Communities Against Poverty event through this landing page.