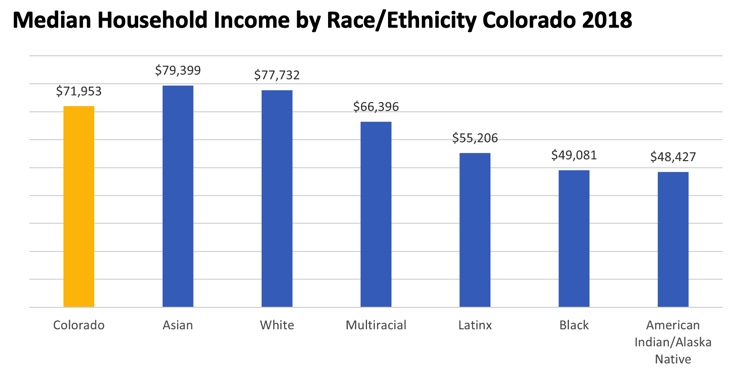 NEWS RELEASE: Report reveals disparities before and after COVID-19

DENVER— Economic fallout from the COVID-19 pandemic have made the disparities along racial and geographic lines even more apparent, according to a new report released by Colorado Center on Law and Policy today.

Published by CCLP, the 2020 State of Working Colorado is a compendium of data designed to look beyond traditional state-level economic indicators of prosperity and provide a critical, in-depth perspective of how working families are faring in our state, including statistics and analysis on income and employment. Among the findings:

* Economic data gathered after the COVID-19 pandemic shows that job losses were greatest among Coloradans with low wages – particularly in the hospitality and leisure sectors. The report concludes that jobs lost in some industries may not come back for a long time — if at all — and that the recovery seen in mid-2020 appears to be losing steam. Meanwhile, unemployment insurance (particularly expanded weekly benefits) has been a “life-saver” for many Coloradans and the state’s economy.

* Wage growth for most Coloradans has remained meager over the past two decades. While wages for most Coloradans stagnated, the growth in wages among the top 10 percent of earners has increased, leading to a widening gap between the top and bottom 10 percent of workers in the state. Increasing wage inequality makes it increasingly difficult for those in the bottom 90 percent to keep up with rising cost of food, housing and health care. With the dramatic loss of jobs experienced in March and April of this year, an even greater number of Coloradans are relying on even less income to make ends meet.

* There are significant disparities across race/ethnicity, gender and disability status. White Coloradans experienced poverty at a lower rate than the overall state rate of 9.6 percent in 2018, while people of color experienced poverty at much higher rates. In 2018, Black Coloradans and American Indians/Alaska Natives experienced poverty at twice the rate of the overall population at 18 and 18.7 percent, respectively. As with wages, a household’s income can vary tremendously depending on the race or ethnicity of the householder. While the median income for white and Asian households were both higher than the state median in 2018, the median incomes for multiracial, Latinx, Black and American Indian/Alaska Native households were significantly less than the state median.

* Almost all of Colorado’s labor force is found in urban counties while many counties have seen their labor force shrink. The share of the state’s labor force living in an urban county increased from 86.7 percent in 2010 to 88.2 percent, while the share living in rural areas decreased from 13.3 percent to 11.8 percent over the same period. The labor force in Hinsdale County grew by the fastest rate in the state, increasing by an annual rate of 6.5 percent. On the other hand, the labor force of San Juan County decreased by an annual rate of 7.3 percent between 2010 and 2018.

“Our economy relies on low-wage workers, and yet, we must be willing to make the structural changes needed to ensure that low-wage workers can make ends meet,” said Tiffani Lennon, J.D., LL.M., Executive Director of CCLP. “Our economy is not working for most Coloradans. Though we don’t know when this public health emergency will end and when our national and state economies will begin to recover, these findings demonstrate why we should not settle for simply a return to a ‘normal’ economy. CCLP envisions a Colorado where everyone can afford food, housing and health care. Achieving that vision requires a serious reckoning with the data highlighted in the 2020 State of Working Colorado.”

CCLP produces the State of Working Colorado every year to help stakeholders and policymakers determine where to focus their efforts in revitalizing opportunities and prosperity for hard-working Coloradans in diverse communities across the state. The full report is available at CCLP’s website.

Colorado Center on Law and Policy is a nonprofit research, legislative and legal advocacy organization committed to joining diverse communities to advance racial equity and remove systemic barriers in the fight against poverty.