An expert in policy advocacy and coalition building, Chaer leads CCLP’s work to help people meet their basic needs and expand economic opportunity. She also coordinates the Skills2Compete Colorado Coaliton and serves on the executive committee of the All Families Deserve a Chance (AFDC) coalition. Staff page ›

Get the latest news and action alerts from CCLP.

As Gov. Polis signs HB21-1311 into law, CCLP’s Chaer Robert looks back—at over twenty years of fighting for Colorado families—and ahead to how the new tax policy will help to reduce poverty and inequality in our state.

Yesterday’s ceremonial signing of HB1311 into law marks a major milestone in the fight to create fairer tax policies for Colorado’s struggling families. It’s a step over 20 years in the making, with so many lawmakers, individuals and organizations working together to reach this point. Those who are immersed in the subject know the work is far from over, but on this important day it’s worth looking at how we got here—and to celebrate those who played key roles along the way.

But first, a primer…

What does the signing of HB21-1311 mean in the fight to reduce poverty and inequality in Colorado?

For a single parent earning $24,000 per year with one child, this could mean a State EITC of about $560 and a State Child Tax Credit of about $840-$1080, depending on whether temporary changes to the Federal Child Tax Credit are extended. By comparison, for 2020 Tax year, this same parent would get only $280.

The reason for taking this approach is simple. What do struggling Colorado families need most? More than anything, they need money.

Whether they need housing, food, transportation, health care, diapers, utility assistance, training, or counseling, having money helps people more easily obtain what they need. Even an extra $1000 per year has been proven to have demonstrable impact on children’s learning, health, and even future employment.

Most low- and middle-income people obtain the majority of their income from employment. Yet those wages often fall short of what is needed to meet basic needs. In Colorado, 50% of working age households with children under 6 years earn less than they need to meet basic needs, more than double the rate than for those without children. [1]

At the same time, Colorado’s “flat tax”—long proclaimed to be “fair” and “easy”—has only furthered inequality and economic struggles by taxing those earning the lowest incomes at greater effective rates than those in the top income bracket. Once our supposedly-flat income tax of 4.55% combines with state sales and excise taxes, the lowest income Coloradans pay an estimated 6.8% of their income in state taxes, while those earning the highest income have the lowest state tax rate of 4.1%. This regressive state of affairs is due primarily to the impact of tax “expenditures”—tax credits which disproportionately benefit only the wealthiest individuals and corporations. 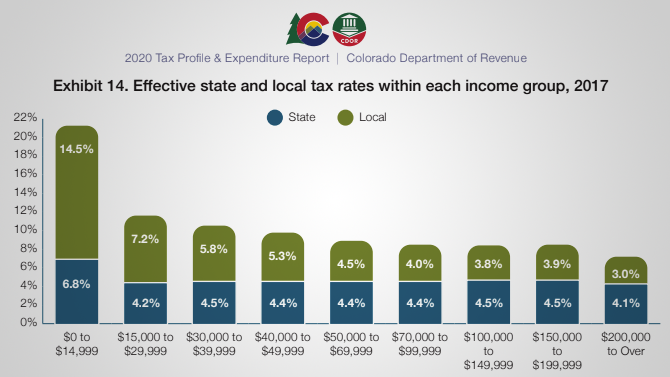 Effective state and local tax rates within each income group, 2017. From the 2020 Tax Profile & Expenditure Report, Colorado Department of Revenue. Download the complete report at https://cdor.colorado.gov/data-and-reports/tax-profile-and-expenditure-reports

HB21-1311 helps nudge our tax code away from this madness in two key ways. For one, the law will deliver an extra $150 million per year into the pockets of approximately an estimated 600,000 low- and middle-income Coloradans. For another, these tax credits will be paid for primarily by capping the amount of deductions on federal income taxes which are carried over to also trigger a state break, as well as other smaller tax breaks. Taxpayers earning more than $400,000 per year will only be able to get a state tax break on the first $30,000 in deductions for an individual, or $60,000 for a joint return.

So how did we get here?

CCLP has been active in the fight for such family childcare tax credits since 1999. That year, then-Executive Director of CCLP Maureen Farrell teamed up with the Women’s Lobby of Colorado (which I chaired that year) to establish the first Colorado EITC. Our modest first step was to establish the state EITC at 8.5% of the Federal credit for which one was eligible.

The following year, CCLP joined with other allied organizations to form the EITC Coalition which successfully raised the State EITC to 10% of the Federal credit.

Unfortunately, to accomplish these things in Colorado’s political climate at that time, the state EITC could only be established merely as a TABOR refund mechanism- a way to return money to Coloradans in years when the state collected more money than our constitutional cap allowed Colorado government to keep. Reductions in the income and sales tax rate, by contrast, were a permanent tax change. This compromise meant that the EITC stayed on the books, but was not funded in 2002… or, for that matter, for the next 12 years.

Advocates, including CCLP, fought to fund it and make it permanent.

In 2013 the Coalition (by now led by Colorado Fiscal institute) worked to pass SB13-001, the Working Family Economic Opportunity Package sponsored by Senator John Kefalas. This groundbreaking law established a State Child Tax Credit while defining a TABOR-surplus trigger that would make the EITC permanent. The EITC met the trigger of being paid again as a TABOR refund mechanism and converted to a permanent change in the tax code after tax year 2015.

But the work of the coalition wasn’t done. In 2020, the EITC coalition-supported HB20-1420 made ITIN filers eligible for the State EITC. Colorado became the first state in the nation to take this important step. However, the Child Tax Credit remained unpaid, though on the books, until the passage of this year’s HB21-1311.

Doubling the impact for Colorado families

With leadership from the broad-based Coalition led by Colorado Fiscal Institute, and our sponsors Rep. Emily Sirota and Rep. Mike Weissman and Senators Chris Hansen and Dominick Moreno, policymakers this year took the opportunity to reset thinking about who should be receiving tax credits. Against a backdrop of COVID-related budget challenges and entrenched interests fighting to keep the status quo, this was no easy feat. But the need was clearer than ever, the benefit to Colorado’s economy inescapable, and for the first time in a long time, the political will existed in our state to make significant impact on the lives of struggling Coloradans.

With the pandemic highlighting the growing income inequity, and some of Colorado’s lowest paid workers, particularly workers of color, earning recognition as some of our most essential workers, Colorado lawmakers were put to the test. A state budget is always a reflection of our true values. The question was: Does Colorado value its essential workers and their families? Thankfully, the answer in 2021 was a resounding yes.

With yesterday’s signing, HB1311 helps make Colorado’s tax code more equitable, ensuring that everyone pays their fair share. It also provides critical support to struggling families, helping them afford what they need to succeed. We’re grateful once again to all those who helped to reach this moment for our state. This is an achievement worth celebrating.

Get the latest news and action alerts from CCLP.