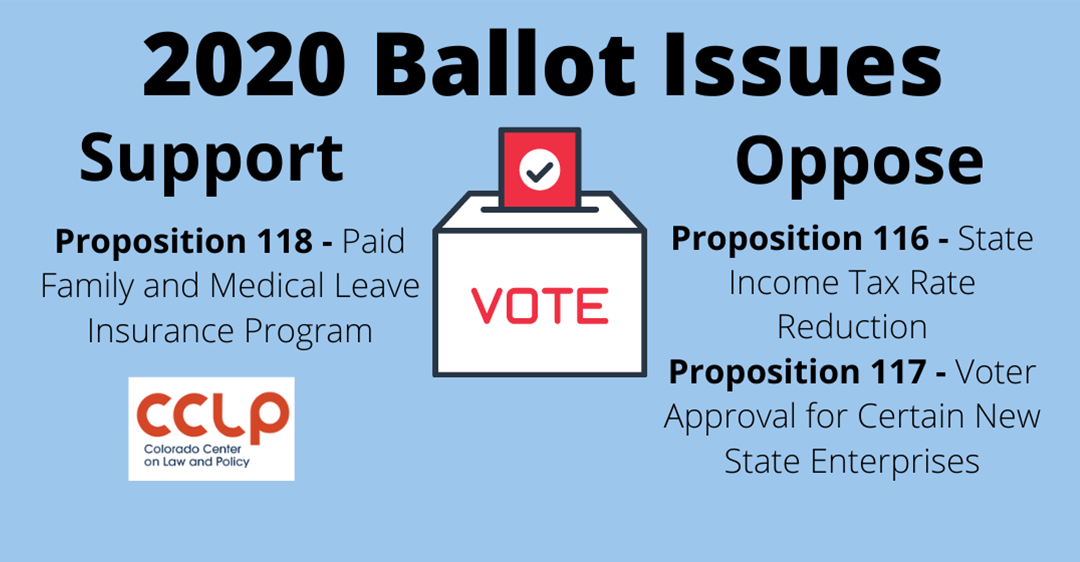 Though the presidential and U.S. senate races are getting the most media attention and “air time,” Colorado voters will have dozens of choices to make during this election cycle. In total, there are 11 statewide ballot questions — in addition to numerous local measures — for Coloradans to consider.

As a 501(c3) organization, Colorado Center on Law and Policy (CCLP) does not endorse political candidates, but we do consider ballot measures that affect communities and families in their fight against poverty or advance the mission of racial equity. With that criteria in mind, CCLP took positions on three statewide initiatives on this year’s ballot.

All told, we support one proposition, but oppose two others. What follows is a brief summary of the measures as well as an explanation of our positions. We encourage you as a voter to refer to the Ballot Information Booklet (aka, the Blue Book), for more details on these and other items on the ballot.

SUPPORT Proposition 118- Paid Family and Medical Leave Insurance Program
Among all nations, only the United States and Papua New Guinea, lack paid parental leave for all of its citizens. In the U.S., higher-paid employees are much more likely to get paid leave to tend for newborn or newly adopted children or a family health crisis.

Unfortunately, paid leave is far from a standard in this country, and there are many disparities based on jobs and income levels. Employees who aren’t protected by the 1993 Federal Family and Medical Leave Act (typically those who work for employers of fewer than 50  people)  or those who work less than a year with the same employer, have neither paid leave nor job protection. But even those covered by the FMLA often take little of the 12 weeks of leave available to them since they don’t get paid. Such inequities are among the reasons we have long supported the creation of a paid family leave program in Colorado.

For better and for worse, the pandemic has shed light on the plight of struggling families throughout Colorado and the nation as a whole. Proposition 118 would help more Coloradans take time off during a life event or a health crisis. The measure would create a statewide program that would give workers access to significant wage replacement that would cover up to 90 percent of the income for the lowest-paid employee in cases of major illness or injury of a worker or a member of their family.

Premiums to fund the benefit would be split evenly between employees and employers at total less than 1 percent of a worker’s salary. Small businesses with fewer than 10 employees would be exempted from paying the employer contribution. Self-employed workers could opt in, paying only the worker share. Employers with a comparable existing benefit would also be exempted from paying the premiums, which would begin to be collected in 2023 after the program is designed and set up.

If the measure is approved by voters, Coloradans could begin accessing the benefits in 2024.The measure is statutory, so can be tweaked by the legislature to address changes in federal law or program experience.

We expect our families to be there for us as we face great health crises. We need to align our governmental policies and benefits to allow all workers to meet these challenges without destroying their financial stability. That’s why we enthusiastically endorse Proposition 118 – a policy that’s badly needed, hard fought and long overdue.

OPPOSE 116- State Income Tax Rate Reduction
Because of the pandemic and its resulting job losses, the Colorado legislature was forced to cut over $3 billion from the state budget — about one fourth of the general fund. Services were cut and one-time federal relief was largely directed to K-12 and higher education. Other funds and “accounting maneuvers” provided short-term relief from deeper cuts.

During these times of unprecedented challenges and stress, people look to their government for help. Unfortunately, Proposition 116 would reduce the state income tax rate from 4.63 percent to 4.56 percent — resulting in more cuts in government programs by reducing the state budget by $357 million more in the next two years.

Where would that money go instead?  According to the State’s Ballot Information Booklet, more than half of the tax reduction would benefit taxpayers making over $500,000 a year – Colorado’s top 2 percent. Families earning the median income would receive less than $4 per month in tax cuts. Meanwhile, Coloradans on the low-income spectrum of the economy – like a couple earning under $25,000 per year– would see no benefit whatsoever.

We strongly oppose this dangerous and short-sighted measure that would give very little financial relief and inflict much harm on Coloradans who rely on state government programs to make ends meet.

OPPOSE 117 –Voter Approval for Certain New State Enterprises
We strongly oppose Proposition 117, one of the wonkier and more confusing issues on this year’s ballot. The measure requires that voters approve any new enterprise funds which collect more than $100 million over their first five years.

What are “Enterprise Funds”? Unique to Colorado and created by TABOR, enterprises are essentially businesses run by the government which receive less than 10 percent of their revenue from tax dollars. Enterprises are funded by corporate fees and provide benefits to Coloradans without increasing taxes.

CCLP has actively supported enterprise funds such as the Hospital Provider Fee, now called the Colorado Healthcare Affordability and Sustainability Enterprise (CHASE). This fee on hospitals collects almost $1 billion per year. The fees are used to draw down over $2 billion in federal funds for Colorado’s health care needs. Because of the enterprise, almost 450,000 Coloradans have health coverage through Medicaid and Child Health Plan Plus expansions without the use of state general funds.

In the past year, we actively advocated for Senate Bill 215 (the Colorado Health Insurance Affordability Fund), which redirected expiring federal fees assessed on health insurance for state purposes. These collected fees will be used to continue Colorado’s Reinsurance program, which reduces insurance premiums by paying for some of insurance companies’ most expensive claims.

Fees will also be used to ensure that people who get federal subsidies through the state exchange, Connect for Health, continue to have affordable choices, and that families whose employer-based coverage is prohibitively expensive can get financial help. Last, working Coloradans who can’t access subsidies due to immigration status will have access to lower-cost coverage. Reducing health insurance costs extends coverage to the individuals affected, and helps all of us by making our schools, communities and workplaces healthier.

Enterprise Funds taps the creativity and resolve of Colorado legislators – within the bounds set by TABOR – to address community needs. Our legislators have listened to constituents’ call for affordable health care and their ability to provide solutions should not be derailed by monied interests.

Closing thoughts
As you review your lengthy ballot in the coming weeks, you carry the weight of being an informed voter. Act not only on behalf of yourself and your family, but in the interests of all Colorado communities that live and work here.

Regardless of where you come out on these and other important issues, we encourage you to vote as if the future of Colorado is at stake – because it is in many respects.

-By Chaer Robert and CCLP staff